Tracing the origin of the Djembe Drum will take us as far back as 800 years. Yet, djembe drum in South Africa will remain a relevant musical instrument. While they are now seen most at shops, markets, or in drumming circles, the fact remains that they remain a crucial part of musical instruments in entire Africa, and remain fancied by millions. 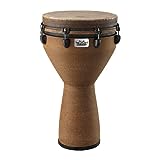 Walking across the streets, especially during weekends, in the afternoon, the chances are high that you will be thrilled to hear drums delivering soothing sounds to your ears as you walk through the building.

If you trace the sounds you hear to the source, it will surprise you that they often include numerous tourists who are filled with joy as they try to strike their drums as correctly as the lead drummer does, trust me, they are also thereby chance and did not want the fun to skip their curiosity.

The longer you stay listening, the easier you’ll detect that everyone will eventually find their rhythm after playing for a long time. That feeling of getting it right is one that makes them spend hours playing and enjoying every bit of the time spent there. The transition they experience takes them into a meditative trance; such is the power of drums on tourists.

These drums are as important as they are, were only made from simple materials which include a wooden goblet, that is covered in animal hide and tuned expertly with ropes running down on its sides.

The Djembe Drum in South Africa

The origin of the Djembe can correctly be traced to West Africa. It is popularly believed that the birth of the drum came from Mali, with some claiming it was first played by the Bambara people who named them after the popular saying “Anke dje, Anke be” which means “Everyone gathers together in peace.”

The majority of the djembes you’ll find in West Africa are skillfully carved with hand, and made from local wood using the old traditional methods. Although some djembes now feature advanced designs due to changes that are noticeable all around us.

Most djembe drum in South Africa are made commercially; the production process makes use of substitutes for wood, which, according to purists, affects the richness of the sound produced negatively.

Irrespective, for casual performances, they are still suitable and perfect for delivering the sort of rich sound desired. Djembe enthusiasts can kick start their career with this option and then switch to traditionally made ones as time passes by.

The Djembe drum is arguably one of the most versatile percussion instruments of its kind in the music world. It features a simple design, yet it is known among many due to its effectiveness at producing different pitches.

Djembe, when handled by professionals, has the power to produce low, medium and high tones by a mere switch in the way the drum is struck, or via a shift in the way the hand is placed. One of the hardest-to-play tones on the Djembe is slap; this is a high-pitched note that professionals play. Amazingly many believe one can only play slap through trial and error. Professionals have different stories and theories on how to play this pitch. Techniques and variations are not totally defined.

Djembe features strings that run down its sides, their weaving pattern often varies, and they come in different colors. Their purpose is more detailed than decoration when playing the Djembe, tightening them will ensure that you get a crisp sound that will improve the sound of play.

One of the most popular layouts is the Mali weave, these diamond-shaped designs are carefully arranged on the sides of the drum, and when tuned expertly, you can effortlessly play high pitches.

It is expected that the tension of the skin will reduce over time since weather and other factors can easily result in wear and tear, players can always tighten their strings to ensure their sound remains top-notch.

And when you play over a long period, the skin of the Djembe will eventually go out of shape, when this happens, you don’t need to stop playing, you only need to replace the skin and keep playing.

It offers more than casual entertainment

Djembe has been used for quite a lot of things over the years. It is an integral part of spiritual and ritual tradition across Africa as a continent. Many traditions make use of drums for communicating with each other; some use it for relating stories, while the entertainment world will never let djembe rest.

In addition to this, Djembe was actually designed for storytelling musicians. The goal was to allow them to pass important religious, cultural, and historical messages from generation to generation.

Yet, you will also find the djembe drum being played by musicians at several occasions like weddings, funerals, birth ceremonies, and other traditional ceremonies.

Many often make use of Djembe due to its entertainment qualities, and the physical skills needed to produce unique rhythms. While skill is needed to play the Djembe and produce the right sounds, yet, those who have never played can easily beat the drum to produce sounds that will come with meaning over time. Holding a beat with other players on Djembe is quite easy. And that is one reason why you’ll find them in tourist centers and other corporate events and retreats.

Known for its rich traditional history, the drum has also found its way into popular cultures. No wonder, famous players all around the continent are known for their abilities to pass unique messages, and thrill their audience. And they have made the integration of this instrument into western culture easier. As such, you can find Djembe in movies, ballets, or recording studios.

One reason why the drum has lasted for so long is due to its build quality, design, and cultural ties it carries. It’s not just an entertainment instrument; the djembe drum in South Africa is an essential musical tool South Africans cannot do without.